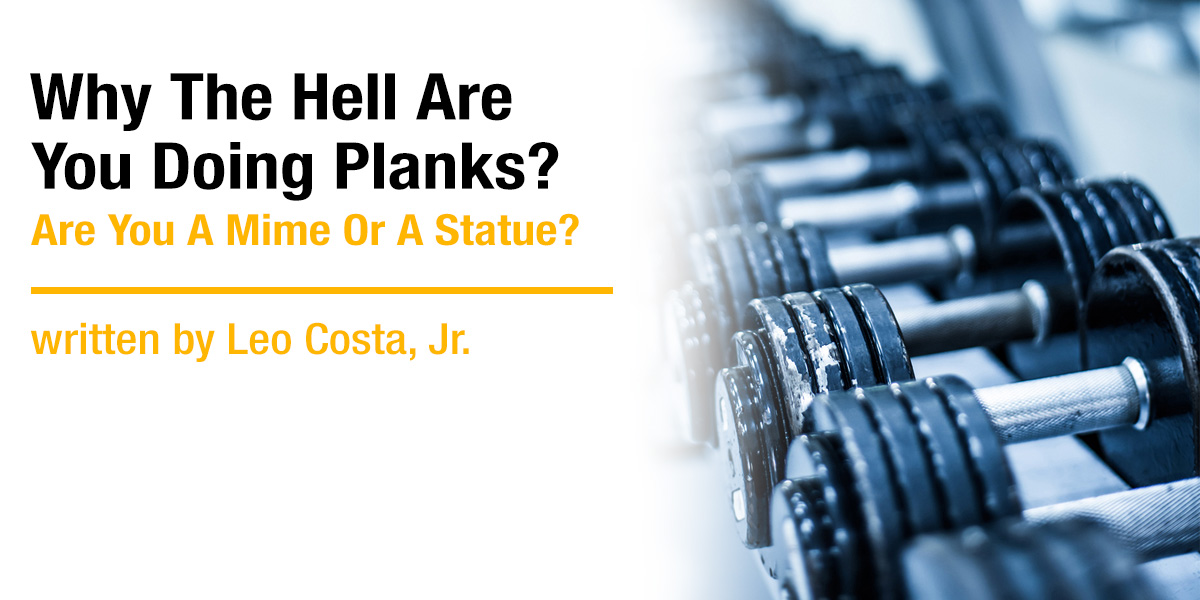 Why the hell are you doing planks?… Are you a mime or a statue?

When you come from old school like me it’s hard to swallow some of the new crap/ information that keeps showing up on the market. Over the years it’s made me question my own philosophy and for what I stand. I realize there is a mentality that if you want to stay relevant you have to adapt or die. This is not an absolute, however you won’t know that until you become a seasoned veteran.

My philosophy and strategy related to exercise and nutrition is based on a pragmatic approach, which to a degree mirrors the great late coach of the Green Bay Packers named Vince Lombardi. Because of his success, he became a national symbol of single minded determination to win, which made him legendary. Like most things, there’s usually a winning formula that produces results.

He believed in perfect execution every single time. His philosophy and strategy was to do less, get a bigger, better, and more efficient result, hence his single minded determination. His team’s execution was so on point, no opponents defense could successfully stop them with any degree of consistency. This is a perfect example of a methodology that is specific and highly functional to an objective.

Although his coaching tactic to the naked eye appeared effortless to execute, it required thousands of hours and repetitions to achieve mastery, but ultimately produced massive results. Under his leadership the Green Bay Packers won five championships. Winning in this fashion is a reflection of a great system.

So how is this content relevant to the headline of this blog? The health an fitness industry has a bad case of SOS ( shiny object syndrome ). More and more crap keeps hitting the market mainly to keep people from being bored, but at the expense of producing less than desired results.

I know exactly why people are doing planks, but this doesn’t change my question. Ask yourself or your trainer if you are doing planks as a part of functional training? If the answer is yes, what the hell is the function, to be a mime or a statue? WTF.

Get the Serious Growth Newsletter

Enter your name and email address below to receive vital training and nutrition advice, and be the first to know about new podcasts and articles.