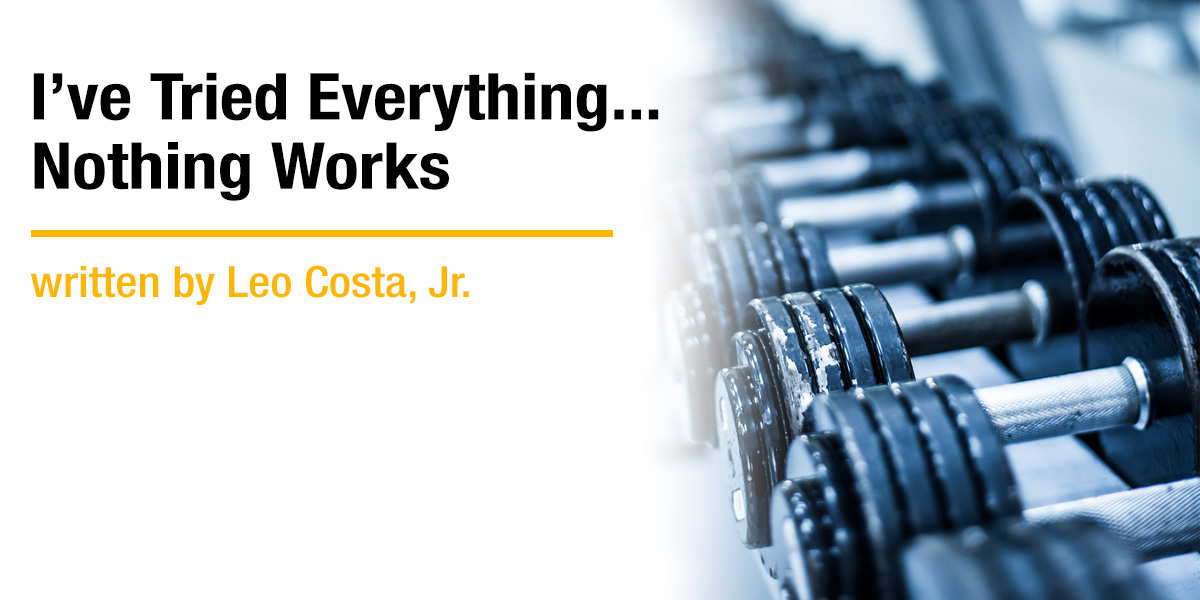 I’ve tried everything… nothing works

Can’t tell you how many times over the last thirty six years I’ve heard this statement. Let’s be clear, it’s a bullshit statement, one that most losers use. It’s easier to give in, than to fight the fight. We know that if we’re willing to admit it, but who the fuck wants to do that.

My job as a legit trainer has always been to deicer bullshit from the real when clients are talking to me. Sometimes I think I’ve been around too long in this industry, to the point I can’t listen anymore. I find myself analyzing every word people say, which for the most part irritates the living shit out of me. Perhaps I’ve arrived at a stage of true mastery in the human condition, however only focusing on its weaknesses. Oh oh!

When I first got into personal training, using the apple as a metaphor, I was eating it, taking giant bites, getting fantastic pleasure.That apple seemed huge, I’m talking infinity huge, with no rotten spots any where, just big juicy beautiful bites, but then came that one day.

What the fuck was that I thought as my face cringed after taking a bite… it was a sour spot in the apple. It started happening more often, but I just rationalized it was because I was eating more of the apple. That’s how the law of averages work, right?

Actually yes, but there was more to it than that, but it was too early to know what was also going on. Albert Einstein was dead on when he said real knowledge is experience. With more years of experience it started becoming crystal clear.

The apple from which I had gloriously been eating had slowly over the years started eating me one bite at a time. I had come full circle, now what? It was time to reinvent myself into a different form or a better version of myself or just cave in like most losers, claiming I’ve tried everything, and nothing worked. No fucking way!!

Get the Serious Growth Newsletter

Enter your name and email address below to receive vital training and nutrition advice, and be the first to know about new podcasts and articles.